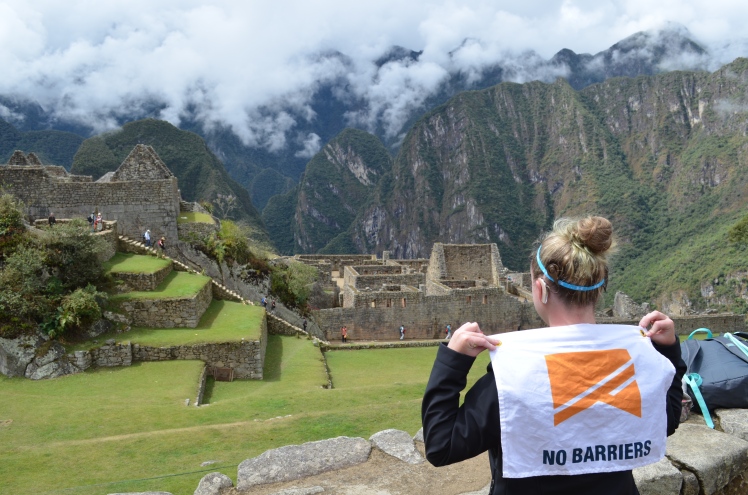 This past August, I had the amazing opportunity to travel to Peru with thirteen other deaf teens/young adults through the No Barriers Youth Program. We spent eight days shuttling to various historic sites and visiting with two deaf schools and an orphanage. Our group was lucky enough to be guided around Peru by a lovely woman named Holly and her adopted son, Dante, who also happens to be deaf. With Holly and Dante’s connections to the local community, especially in Cusco, we were able to get a very intimate look into the Peruvian culture and deaf community. While abroad, I learned that Peru is actually sixty years behind America in terms of technology and advancement, which means the deaf community is even further behind. Of course, I wasn’t surprised by this fact, but when I got a firsthand look into how far behind their deaf world is, I really felt and understood the need to help improve their community. Don’t get the wrong idea, however, that their world is bleak and somber. It’s not. In fact, the children and young adults I met with were happy as can be and thrilled to teach the group and I what they were learning about in school.

The goal of No Barriers Youth is “To unleash the potential of the human spirit”. With that in mind, the trip was about stepping outside of our comfort zone and gaining skills to become the best possible leaders and advocates we can be. Everyone, except for two group leaders, was either deaf or hard of hearing. Since we face and overcome our own obstacles at home, the trip allowed us to experience another deaf world, learn about their unique obstacles, and discuss ideas about how to improve their community.

For the duration of the trip, we had to give up our cell phones. No, we weren’t being punished, but giving up cellphones is standard on every No Barriers expedition because they want us to eliminate outside distractions and fully immerse ourselves into the world they’re taking us into. As someone who uses her phone way too much, it was definitely hard at first. My world became a thousand times smaller, and while it was intimidating at first, it was actually for the better. I really began to connect with those around me, and learn extensively about a completely different culture and community.

In America, those with disabilities are legally entitled to accommodations and services, have representatives speaking out on their behalf in the government, and have access to the most up-to-date technology.

Unfortunately, Peru is very behind. There is nowhere near as much electricity, heat, and Internet as in America. Furthermore, people honestly don’t know what to do about those who are deaf. They either forget about them or throw them in deaf schools.

By visiting with local deaf schools, I learned so much valuable information.

We first visited Senales (“Signs”), and met with fifteen young deaf adults who do not have a high school education. As a nongovernmental program, Senales strives to raise awareness about the lack of educational opportunities for deaf youth, while also providing coursework to its students. At night, interpreters accompany the students to night school, where they work towards earning a diploma and finally graduating high school. During a discussion with the instructors and students, I learned that most deaf children only go to school until sixth grade (!!!) because interpreters and services are scarce. We went around the room and introduced ourselves, and had the opportunity to hear some of the students’ stories. A former student introduced himself as Junior and shared that he had recently graduated high school, with the help of Senales, and frequently returns to the school to mentor current students. He’s twenty-two years old, very enthusiastic, and really committed to helping other deaf youth. Holly told the group that Junior dreams of attending college one day, and I’m thinking to myself, Wow, I’m currently attending one of the greatest universities in the US, and it’s only a dream for Junior, and others in developing nations. What I heard firsthand really puts things into perspective because, in my life, it’s normal that most young adults go to college right after high school. Many of my deaf friends excel in school, thanks in part to accommodations, and attend great colleges as well.

Furthermore, I learned that one young boy, about fourteen years old, had just started learning Peruvian Sign Language! Imagine not knowing how to communicate with anyone, not even friends or family, until you were already in your teens? I couldn’t believe it when the instructor shared this with us. That would most likely never happen in the US, but unfortunately, it’s a reality for many deaf youth in Peru and other developing nations.

I heard about some parents who had no idea what to do with their child that, for most of the day, they would leave them sitting in a corner, alone. Many are from rural communities and have very little education that they don’t know who to seek out for help. When someone reached out to that young boy’s mother, she brought him to the school, and he finally began earning the education he deserves.

As we were getting ready for lunch, the instructor asked what the students wanted to eat. When it came to the young boy’s turn, he looked down, shook his head, and signed “no”. The instructor didn’t press, and was about to move on, before Junior quickly realized that the boy actually couldn’t understand the instructor. So, in a mentor/brother-like fashion, he explicitly signed out the lunch choices, and the boy understand and signed his answer. If people like Junior weren’t around, that young boy would be trapped in his own world, starving.

Before we left, we got to play the cajon (“box”), which is a drum-like instrument used to teach deaf youth music in Peru. Since they can’t hear, what better way to teach them music than to sit on a box and feel the vibrations of sound? A famous cajon musician came in to teach us some cool beats to which two professional dancers showed off traditional Peruvian dances. 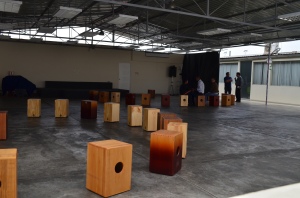 A few days later, we visited the Santa Maria de Lamay orphanage, which houses young children ranged from the age of three to fifteen. We were literally welcomed with open arms. As we were getting off the bus, there were about five young girls waiting to greet us and give us the warmest hugs you’ll ever receive in your life. Run by nuns, the orphanage offers a stable life for the children, who receive food and an education. However, I noticed that the buildings lacked heat, and the surrounding area of the orphanage was very decrepit. When I held one young girl’s hand, it was freezing. But despite their barriers, every one of them had a smile on his or her face. These children taught me that you don’t need to have everything in life to be happy, just embrace the smallest things and live in the moment. They were eager to show us their classrooms and gift shop, where they make and sell their own handcrafts.

Before we left, we gave all the children toys we had brought from home. Jumping up and down in excitement, they ran around with their jump rope, bouncy balls, and glow sticks. The picture below is one of my favorites, embodying the true happiness of the children.

We spent the last two days at Dante’s school, San Francisco de Asis, interacting with the children and learning more about the deaf community. We had a huge, interactive discussion on what needs to be done in Peru and who can advocate on their behalf. The deaf community actually had a representative in the Peruvian government, but he died five years ago, so no one in the community has been able to garner enough power or momentum since then. When I asked if there was anything like the Americans with Disabilities Act in Peru, one of the teachers told me there was, but no one was enforcing the law. Are you kidding me? The government is already breaking the law with so many deaf children unable to go to school or hold down a job! Things are different in developing nations. Everything is chaotic, lost in translation, and forgotten about. Furthermore, many of the teachers who arrived at San Francisco de Asis did not have access to training or any exposure to the deaf community. They were simply assigned to the school. Not only does that intimidate the teachers, but it also hinders the right to education for many deaf students. When the teacher is behind, the student is behind.

Since I can’t go back to Peru right now, I feel that it’s very important to get word out through social media and word of the mouth about the deaf community in Peru, and of course, other developing nations, because there really are deaf children sitting in the dark corners of their homes right now, unable to communicate with their families. One of the requirements for a job in Peru is a high school diploma, which is extremely difficult for a deaf child to get on his/her own. Thus, many are without jobs and end up homeless.

In addition to learning about the deaf community, we got to visit many historical sites, including Macchu Picchu! When we first arrived at Macchu Picchu, it was pouring rain and I was disappointed that I wasn’t going to see all the amazing views I saw on Google. As we started walking up to the top, the weather cleared up, THANK GOD.

One a last note, I would like to say that I’m so grateful for the opportunity to learn about a completely different deaf community. Because of this experience, I have been able to realize that I actually have more opportunities in America than I realize. Even though I was lucky in the lottery of life, I still feel a need to help those who do not have a voice. I sincerely hope to travel back to Peru one day, and perhaps volunteer at one of the schools, and work with or develop an advocacy group that gives the deaf a voice in the Peruvian government. 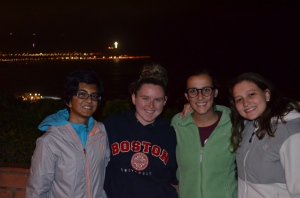 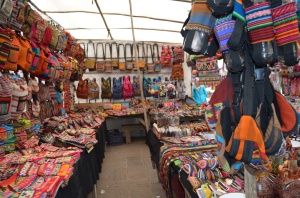 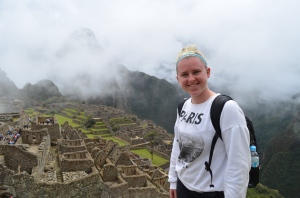 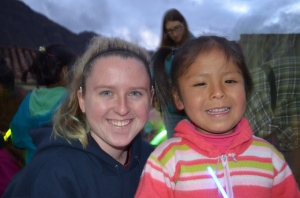 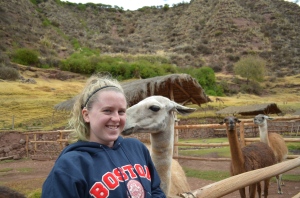 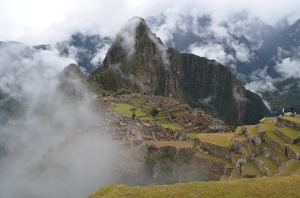 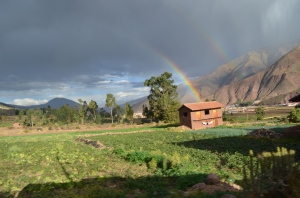 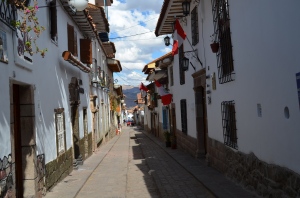 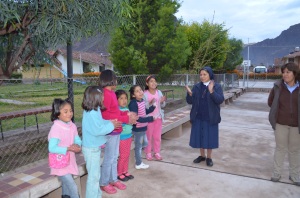 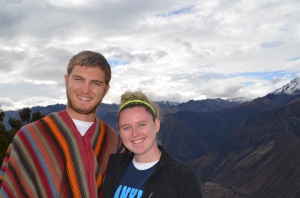