On January 14th, 2018, I had the chance to see what most people only see and read about in history and geography books: Mount Everest! On the very last day, the remaining volunteers and I left our hotel at 5:30am to catch an early morning flight to the Himalayas and witness Mount Everest’s beauty firsthand. We boarded a small propeller plane and departed around 7am. Fortunately, everyone on board could get a window seat with a view. Soon after takeover, the plane went silent and we all gazed out the window as we passed the clouds and a beautiful snow capped range appeared.

The Himalayas, home to some of the tallest mountains in the world, is undoubtedly breathtaking.

About 15 minutes after takeoff, the flight attendants said we could take off our seatbelt, and walk up and down the plane for some amazing mountain views. I took off my seatbelt and darted across the aisle to the other window seat, which offered a better glimpse of what would soon appear to be Mount Everest. I could hear the flight attendant chirping away about something, but of course, nothing was comprehensible. So, I called her over, asked what she said, and she pointed out a bunch of smaller, lesser known mountains…..and then, Mount Everest. 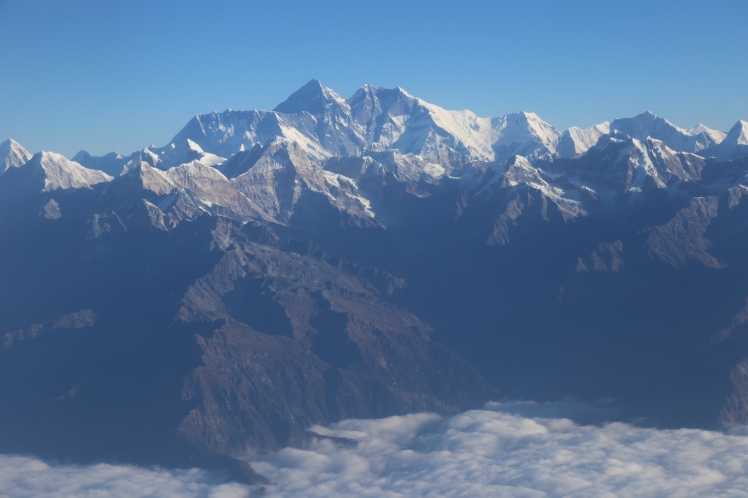 Squeezed in between two smaller mountains in the foreground, Everest clearly stood out as the tallest peak. As someone who won her Elementary school Geography Bee in 5th and was completely enamored with maps and the idea of travel, I almost wanted to cry because this adventure was so unexpected and I considered myself so lucky to be witnessing this. I had never heard of a Mount Everest flight until my friend, Caroline, suggested it.

While in flight, each passenger, including myself, had the opportunity to go into the cockpit to 180 degree for views of Everest. This was the best way to conclude an amazing, unforgettable adventure in Nepal with VoluntEARS.